Straw Polls – Should we listen to them?

As a researcher, I absolutely love election season.  While I could say that the reason for this is that I am simply living up to my obligations as a citizen (partly true), the real reason I enjoy it so is because of all the polls that are released.  And because so many polls are released, it can become difficult to decipher which ones are good and which ones are political nonsense.  That is what makes it interesting for a researcher!

There has been a lot of talk in the recent Republican primary race about straw polls.  And each of these polls seem to declare a different victor.  Mitt Romney won the New Hampshire poll, Rep. Ron Paul won both the Washington, D.C. and the California polls, Herman Cain won the Arizona poll, Michele Bachmann was victorious in the Iowa poll.  So many polls, so many different winners.  This begs the question, what exactly are straw polls and should we as potential voters listen to them?

Let’s begin with the first question – what is a straw poll?  There are two broad categories of polling: scientific and unscientific.  Scientific polling uses random sampling controls so that the results from a sample that is drawn is statistically representative of the population.  Previous posts have discussed this greater detail.  Unscientific polling, on the other hand, has no systematic sampling controls in place that would allow for representation of a population.  Historically, a lot of straw polls in the United States have been political in nature, and are usually fielded during election season by a particular political party.  The very name “straw poll” alludes to their nature – it is thought that this idiom alludes to a piece of straw being held in the air to determine which direction the wind is blowing.

Most straw polls are very targeted, very narrow surveys of opinion.  Their main purpose is to take a “snapshot” of a general opinion during a particular point in time.  This seems valid enough, but the difference between scientific and straw polls exists within the methodology.  Most straw polls use a form of convenience sampling that is a bit unorthodox, and the selection bias associated with can be extreme.

It is hard to assign a broad methodology to all straw polls (as each one is different in its own right), but many of them have candidates, such as in the Ames Straw Poll in Iowa, attract voters to cast their vote on who they believe should be the Republican candidate.  If it sounds like political grandstanding, it’s because it is to some degree.  It uses somewhat of an “honor system” whereby anyone can vote (within the parameters), which opens up a whole argument regarding the validity of the polls.

This brings us to our second question – should we pay any heed to the results of these polls?  I previously stated many of the recent straw polls and their victors.  There have been many polls, and there have been many different winners.  But to answer this question, we only need to look at the candidates themselves.  And they certainly place weight on these polls.  Tim Pawlenty dropped out of the Republican primary because of the lack of support the Iowa poll showed for his campaign.  Entire strategies are formulated based on results of straw polls.  That is because these polls show the weaknesses of particular candidates.  And for this reason, candidates are perhaps wise to take caution to what the polls are telling them.

However, are they good predictors of ultimate outcomes?  In answering this question, we are reminded of the 1936 presidential election.  The Literary Digest conducted its own straw poll, which showed Franklin Delano Roosevelt being defeated by a large majority.  We all know this was not the case, and the reason for this catastrophic (as it led to the downfall of the Digest) miscalculation was in the methodology of the poll, which is the main criticism of any straw poll.  The Digest used their mailing list to administer the poll, which consisted of motor vehicle registries and telephone books.  The problem here?  It was the Great Depression – many Americans were too poor to own a car or telephone, and thus a large sector of the population was neglected in this poll (selection bias at its finest), the very sector that was more likely to vote for FDR and his economic reforms.

The point of this post is this: take what you hear from these straw polls with a grain of salt.  They do little to predict outcomes, but can be very valuable to the candidates themselves in adjusting and fine tuning their campaigns.  Although there is a vast expanse of difference that exists between a lot of straw polls and scientific research, it can be surprisingly easy to muddle the reliability of each. However, knowing how to digest the results of research, both good and bad, will help you to avoid unsettling surprises. 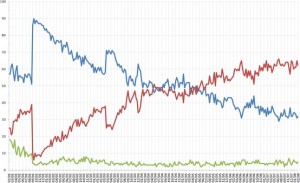 Social media as a research tool – The danger of selection bias

“DEWEY DEFEATS TRUMAN” – A case study in trusting the untrustworthy